Thank you to Joe Melia at Bristol 24/7 for this interview, which I loved being a part of. You can read it here and I’ve also pasted it below…

Ewins, who lives in St George, tells Bristol 24/7 more about the contrast between writing stand-up and fiction, fate, and the influence of children’s books on his work.

You said in another interview about stand-up comedy: “When I perform, I’m performing a character, it’s not really me.” Is it really you who has written the novel?

It’s funny, that’s the exact question my mum asked when I said I’d written a novel: “was it really you?” Strangely, I would say that this novel is more me than any of my stand-up shows have ever been. I wrote We Are Animals over four years which were, in my personal life, a fairly eventful four years, so whilst most of the plot is whimsical and hopefully (!) humorous, there’s a lot in there that is personal to me. It’s set across ten countries, all of which I’ve visited at some point, and the characters are all based loosely on people I’ve met.

Having said that, there is literally a chapter in We Are Animals which tells the life story of a cow in Goa, and whilst I enjoyed writing it, I wouldn’t say that bit was all that personal to me.

How different is writing fiction to writing stand-up, and did you find writing the novel to be a kind of performance?

There are two ways to answer this; my stand-up sets were largely punning and one-liners (with a few rap songs and a strip-tease chucked in, naturally). When I was writing comedy, often the connection with the audience came from the performance itself. You don’t get to do the performance bit with a book, it’s normally delivered to the reader whilst they’re alone. It’s much more intimate in that way.

The other way to answer is in a literal sense; writing stand-up and fiction are very similar. On an iPad, on a bus, on the way to work. 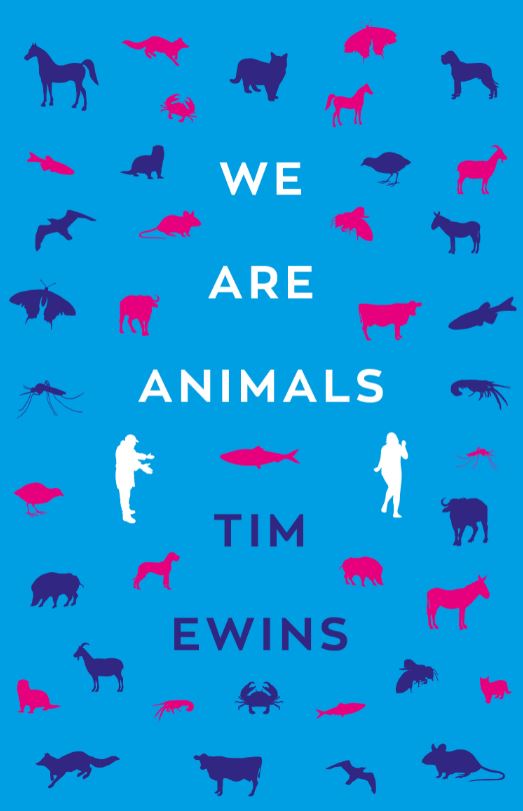 What inspired the main premise of the book?

I like reading books which are set in interesting countries, and I like stories about real love that lasts a lifetime, despite the odds. The concept of having different animals pop up throughout the book to symbolise certain parts of the plot was inspired by the many children’s books that I used to love myself, and now love reading to my son. I’m a huge fan of Roald Dahl, and I wanted to write about animals as characters in the same way that he does in some of his younger books, but I wanted to do that for adults.

The word ‘fate’ appears 27 times in the novel. Do you believe in fate, in “letting the universe take over” as Manjan puts it?

Thank you for counting! Manjan, the main character in We Are Animals is a strong believer in fate, because he has to be. Honestly, I’d like to think that if something doesn’t happen, then something else will, and that fate can lead in many different directions.

I’m not the kind of person to believe in fate, but the fact remains that I met my wife, who is from the opposite end of the country, in the union bar on my first day of university and fell instantly in love with her (she claims the same thing, although I think that way round is harder to believe.) We were friends for about five years before we admitted that to each other, so that feels pretty fate-y. Although, I suppose, another way to look at that story, is that both me and my wife have the capacity to keep secrets from each other for long periods of time…

Is the town of Fishton where Manjan grew up based on anywhere in particular and did you grow up in a similar type of place?

Lots of the locations in We Are Animals are real, but all the English towns are fictitious to allow me the creative licence to make things up about them! Fishton is basically Whitby with pieces of my hometown, Clevedon, thrown in. As far as I know, neither Whitby nor Clevedon have an international illegal lamp trafficking scam going on in them, although if they did, I assume I wouldn’t know about it, so maybe…

There is another English town in We Are Animals called Victoridon, where Manjan and Ladyjan go to hide out in the seventies. Victoridon is Clevedon in every way, down to the specific charity shop where Ladyjan and Manjan buy their disguises.

Are you a Vest (energetic, optimistic) or a Moustache (seasoned, knowing)?

I’d like to think I’m a bit of both, but not necessarily the best or worst bits of either. A person who is a moustache would think that a person who is a vest is annoyingly positive, like a puppy repeatedly jumping into your knee and then falling backwards, over and over again. The vest would think that the moustache is just stuck in their ways and grumpy. But blind optimism can be a beautiful thing, as is knowing who you are and knowing what makes you happy. I think we’re all probably a little bit vest and a little bit moustache.

Tim Ewins’ debut novel, We Are Animals, will be published on March 2 in ebook at an introductory price of £1. The paperback edition will be published in the summer. For more information, visit: https://www.amazon.co.uk/We-Are-Animals-Tim-Ewins-ebook/dp/B084HK3C8Q/ref=sr_1_1?keywords=tim+ewins+animals&qid=1581349978&sr=8-1

I'm a videographer View all posts by teabagg